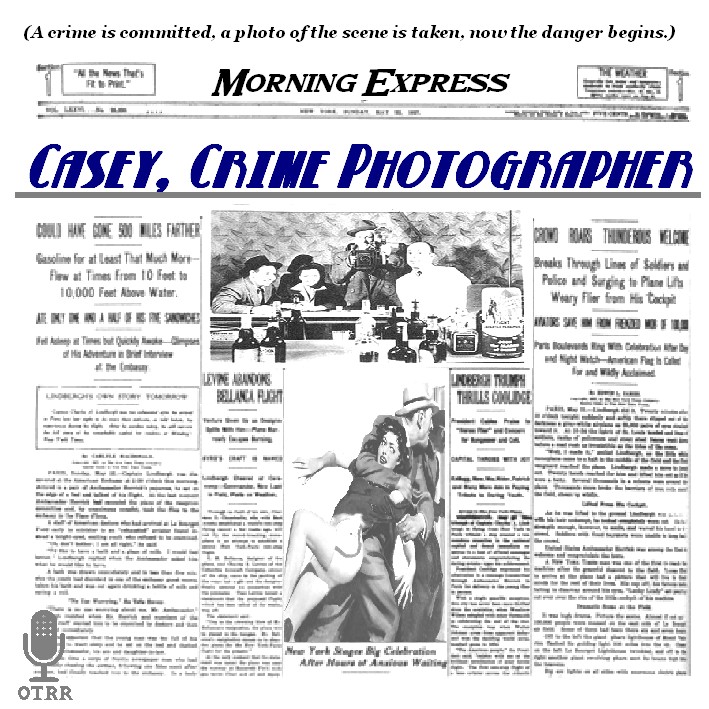 Casey, Crime Photographer had more history than substance. It was a B-grade radio detective on a par perhaps with The Adventures of the Falcon, better than Mr Keen, Tracer of Lost Persons, but lacking the style and polish of The Adventures of Sam Spade.

Originally appearing in the pages of Black Mask, under the watchful eyes of then-editor Joseph Shaw, Flashgun Casey was the originally fast-talking crime photographer, a big, hot-tempered Boston Mick with a gift for gab and a nose for trouble. No "artiste", Casey kept a bottle of hooch and a .38 in his desk drawer, and boasted of being able to put a "slug where he aimed" and having "two big fists he knew how to use". He appeared in several short stories in the pulps and several novels.

Casey, whose first name was never revealed, was the major crime photographer at the fictional Morning Express newspaper. With the help of reporter Ann Williams, he tracked down criminals and solved numerous crimes on this popular mystery-adventure series. Often a picture snapped at a crime scene led Casey to play detective.

Casey and Ann often enlisted the aid their police cheif friend, Captain Logan during each week's half-hour episode. In between assighments, crime investigators Casey and Ann went to their favorite tavern, 'The Blue Note', and discussed their adventures with their bartender friend Ethelbert. There the crowd was friendly and the music was more than a backdrop. The jazz piano belonged to Herman Chittison, Matt Crowley and Staats Cotsworth played Casey, with the latter playing the role longer: Alice Reinheart, Betty Furness, Jone Allison, Lesley Woods, and Jan Miner (best remembered in the role) played Ann at different times.

Any possibility of getting The Falcon episodes downloaded and put in order? That series is compared to other shows here but has never been downloaded. Other sites have single episodes that don't run in sequence like this fine web site.

I think others would appreciate it as well on Archive.

Possibly the ZIP file was corrupted during download, but more likely, it's a Windows issue in dealing with folder and file names that are too long. Try moving the downloaded ZIP file to the root of your C:\ drive (or the root of any other drive letter on your computer -- that's the shortest possible path) and extracting it from there. It should unzip OK and without a password prompt.
Reviewer: barnkeeper - favorite - June 4, 2009
Subject: Passwords needed for CD 1of 4
Using the basic file extraction tool of Windows XP each time I tried to extract the files about the show's cast, photos, etc. (marked as disc 1 of 4) each file requires a password. Does anyone know what the originator's password was that we are to use? I don't know what to do from this point and I'd like to view the files. Thanks.
Reviewer: Greybelt - favoritefavoritefavoritefavoritefavorite - December 25, 2007
Subject: One of Radio's Best Regarded Series
Casey, Crime Photographer was based on the novels and short stories of George Harmon Coxe. The 1940s feel and interplay of the characters is always entertaining and light. While not the best of old radio (Escape and Gunsmoke had far higher quality overall production), Casey works like one's favorite comic book with endearing characters that make you look forward to next month's issue. Casey's relationship with reporter Ann Williams is of the typical 1940's movie romantic teasing of the audience (will Casey show Ann more interest? will Ann just say that she's enamored of him?), the tense relationship with the gruff and sometimes clueless police commissioner who admires Casey but hates his meddling in police affairs, and the malapropisms of bartender Ethelbert of the Blue Note Cafe, where Casey and Ann always seem to be when sorting out the details of their mysteries.

The definitive book about the character and the series as it was portrayed on radio, the big screen, and in print, is by OTR expert David Siegel and Coxe expert Randy Cox (no relation).
http://www.bookhunterpress.com/bookhunter/images/flash.html

This archive.org collection includes show background and photographs that were not included in the Siegel-Cox book.

Uploaded by OTRRArchive on November 24, 2007